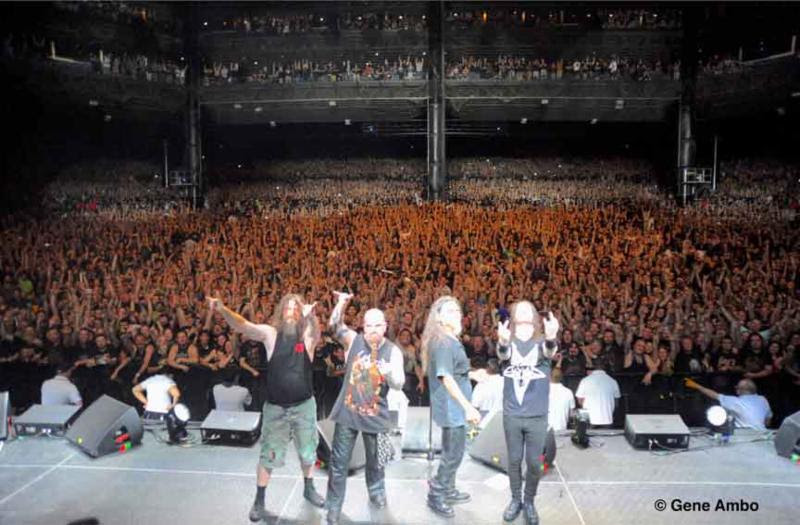 “We always knew this tour would take us into 2019,” said Slayer‘s Kerry King, “and we’ve been blown away by the response we’ve been getting here in North America. We’ve heard about fans who have driven five, six hours, or flown in from other cities or countries to see us, so we want to assure our fans that we’ll be on the road through 2019 and will get to as many places around the world as possible to make it easier for everyone to come and see us one last time.”

To date, Slayer‘s Final World Tour has consisted of Leg One and the just-wrapped Leg Two in North America, with Leg Three taking the band to the UK and Europe from November 1 through to December 8, 2018. The band’s announced itinerary also has them headlining Mexico’s ForceFest on October 7, 2018, and Hellfest Open Air in France on June 23, 2019.

Plans are already underway for Slayer to take its Final World Tour to South America, Australia and Japan in 2019.  But there will be more, plenty more. 2019 is twelve months long, and the world is a big place. Additional tour Legs will be announced soon.

“I just want to take the time out to say thank you to all our fans who have made this first part of this tour phenomenal,” said Tom Araya.  “You really are loyal and dedicated fans and we appreciate that so much from you.  We still have quite a few places to play, so next year, keep your eyes and ears open so you can catch us live one last and final time.  Again, thank you!”

In a new video released today, SLAYER’s Tom Araya and Kerry King share the story behind the previously-unseen short film and boundary-pushing music video trilogy that is set to be presented alongside Slayer’s entire 2017 concert shot at the Los […]

Slayer at the KFC Yum! Center in Louisville, KY 11-NOV-19

November 17, 2019 Michael Deinlein Concert Reviews, US Comments Off on Slayer at the KFC Yum! Center in Louisville, KY 11-NOV-19

Slayer says goodbye to enthusiastic Louisville/Kentucky fans with raging final performance along with friends Primus, Ministry and Phil Anselmo and the Illegals. T minus 12 and counting!  12 is the number of shows the legendary […]